Well, the world’s grandest and most respected tennis event in history is just around the corner. The leaderboard places are up in the air as British favorite Andy Murray is still yet to make his comeback after taking almost a full year out for a long-standing hip injury. His last professional appearance was at last year’s Wimbledon 2017 when he lost to American Sam Querrey in the Men’s Singles quarterfinals.

Murray is one of the most well-known and successful British tennis players in the men’s field, having won the US Open, the ATP World Tour Finals and the prestigious Wimbledon, twice, alongside his two Olympic Gold Medals, the only British male to do so.

Aside from being the biggest and most prestigious, Wimbledon also happens to be one of the four Grand Slam tennis tournaments, the other three being the Australian Open, the French Open and the US Open. Although all four of the Grand Slam tournaments are considered elite, Wimbledon is without a doubt the grandest stage of them all whilst also holding the record for being the oldest, as the competition has run consistently for 141 years. Since the Australian Open changed from grass to hardcourt in 1988, Wimbledon is now the only major tennis tournament still played on grass. Although there are many, one of the many notable elements of Wimbledon is the fascination with Strawberries and Cream, a favorite food, especially in London.

Another notable element that makes the event stand out so clearly amongst other high-level tournaments, especially the additional Grand Slam events is the ultra-strict uniform code that the athletes have to adhere to, which requires all players no matter their standing or experience to wear all white from top to bottom.

This includes any and all underwear, sweatbands, headbands, socks and even any medical/sports equipment such as wrist wraps or joint supports the athletes may require. Although the rule may seem a little over the top, especially to the athlete sponsors, officials made the reasoning behind the rules crystal clear, explaining that throughout the tournament, they would prefer the spectators to pay attention to the playing ability and skill of the athletes, rather than any outfits, colors or advertising.

If you’re planning on checking out the games this summer, be sure to use this handy guide to the rules and regulations of Wimbledon so you can enjoy it in full with no interruptions! 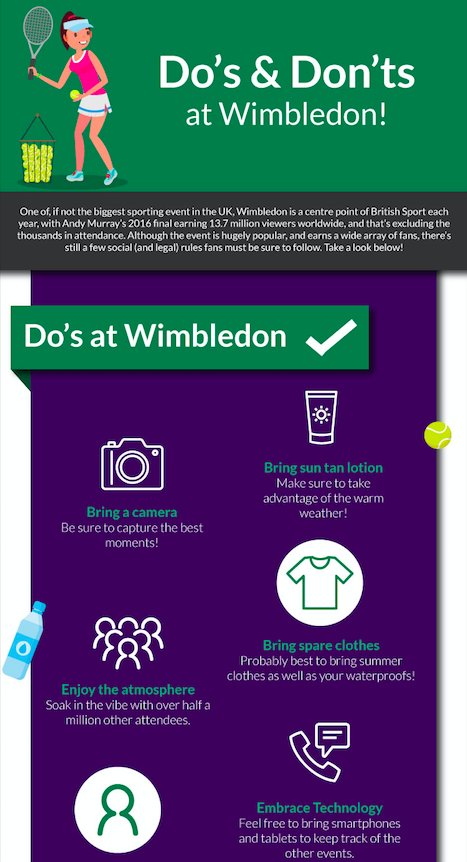 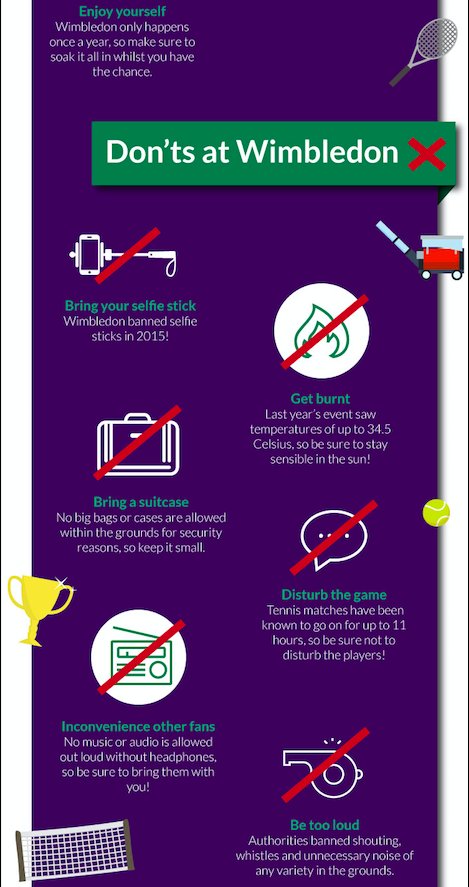