Portuguese International and Real Madrid’s forward Cristiano Ronaldo scoped the big prize at the Fifa Awards 2017 in London. It is the fourth time in five years Ronaldo has won the prestigious award. The awards ceremony was a glamorous event attended by legends such as Diego Maradona and hosted by famous actor Idris Elba. Cristiano Ronaldo has now won the award for the fifth time equaling his main rival, Argentine Lionel Messi. Both players are exceptional footballers. And it is a hard bet choosing between the two, even for seasoned online gamblers who know how to play best online slots. 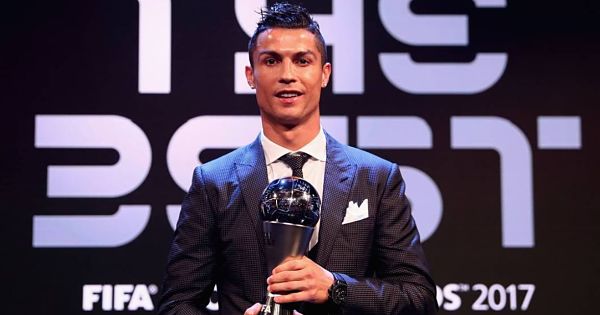 The final shortlisted candidates for Fifa best player of the year were Cristiano Ronaldo, Lionel Messi, and Neymar. All the three were sitting together and before the much-anticipated award was announced, all of them were presented with awards of Fifa World Team 2017. Cristiano was the favourite to scoop the award after guiding his national team to Euro 2016 victory.

In his speech, the striker thanked his supporters, teammates, both country and club managers for helping him to secure the award.  The Best Fifa Men’s Player award is voted for by the media and coaches from all over the world.  On the same occasion, Best Fifa Women’s Player award was won by Lieke Martens.

The Real Madrid coach and legend Zinedine Zidane scooped the Best Male Coach of the year after leading his club to a second Champion League trophy victory in two seasons. Each year the best goal from all over the world is voted for, the award is called Puskas and this year’s award winner is France and Arsenal striker Olivier Giroud.